"Bumblebee makes an appearance as one of the Autobots in the live-action Transformers film trilogy. He retains some elements from his Generation 1 design, such as the iconic horn-like pieces in his head, which are articulated in the films. The cautious but brave Bumblebee was given a different alternate mode from his original G1 incarnation, instead of a Volkswagen Beetle, he transforms into a Chevrolet Camaro (the model year of which is upgraded in the first film). Director Michael Bay states in the special features of DVD 2 of the first film, that the change of Bumblebee's alternate mode was due to the fact that a Volkswagen Beetle reminded him of Herbie. Due to a battle injury, he is rendered effectively mute, and communicates through use of selected playback of radio and television signals. Though his original voice is restored at the end of the firstTransformers film, he communicates solely through his radio in Revenge of the Fallen and alternates between his voice and his radio in Dark of the Moon. The biography for the Decepticon Hardtop figure states that he and Bumblebee are old rivals and it was not Megatron who damaged Bumblebee's vocal processor, but a shot from Hardtop's gun. This, however, is in almost direct opposition of the film's prequel.
Bay stated in an early interview that Bumblebee stands about 17.5 feet tall (5.33 m),[20] but the official guide to the Transformers video game says he is 16 feet tall (4.88 m)."

"In the 2007 live-action film, Blackout is the first active Decepticon (and first Transformer) to be seen. Early in the film, he, along with his minion Scorponok, attacks the SOCCENT Forward Operations Centre in Qatar, disguised as a MH-53M Pave Low IV helicopter, tail number 4500 X, that was apparently shot down over Afghanistan three months earlier. Blackout is escorted to the base by two F-22 jet fighters, where he transforms and single-handedly destroys the whole base. During his attack, he attempts to hack into the base's system to download data on the location of the Allspark and Megatron, only to have the hardline to the system cut off by a military officer. He then deploys Scorponok, sending him after a fleeing Captain William Lennox and his team. Later, Blackout is seen rallying with the other Decepticons to Starscream's call, after Frenzy discovers the Allspark in the Hoover Dam, saying "All hail Megatron" as if to remind Starscream who his master is. Arriving in Mission City during the final battle, Blackout attacks Sam, who is saved by the timely intervention of Ironhide, who throws a car at Blackout, which the Decepticon blasts out of the way and then he shoots down Ironhide. Later he attempts to kill Sam with his rotor weapon, but misses him by a few feet. Towards the end of the battle he attempts to help Megatron finish off Optimus Prime; however, he is attacked by Captain Lennox and his team, the former racing underneath him on a motorcycle and firing at him with a sable round, along with human pilots in F-22s firing a barrage of missiles from the air, eventually killing him. (The events of "Starscream's Militia" and Alliance issue #2 occur next.) His corpse is disposed of in the Laurentian Abyss, along with Megatron and the other fallen Decepticons." 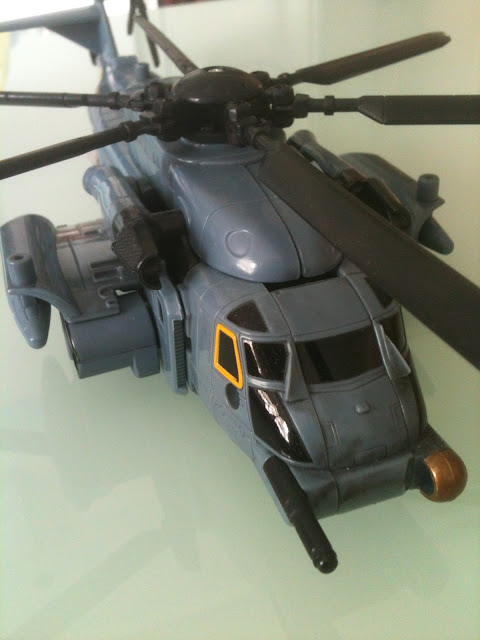